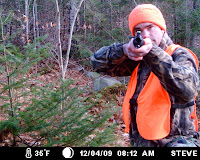 On the final day of the black powder season, the wind speeds are currently gusting to 20 MPH with the thermometer on the porch reading 21F. While normally an extremely motivated, high energy, "A" type personality, today I am wildly out of character. In the fading light of the afternoon, I am lazily sitting here curled up on the couch basking in the warm glow of the Christmas tree quietly sipping spiked eggnog in an attempt to wash away the memory of this past deer season. This isn't to say that there weren't good memories associated with my pursuit of whitetails, throughout September with bow, November with firearm and December with muzzleloader. Instead what I am saying is that with the season passed, I am feeling a bit abused and perhaps disheartened. After 9 straight years of hunting, I have managed to shoot 10 deer. This year squarely and firmly broke that winning streak. I realize I had to strike out sooner or later but that isn't the point. My depression stems from the low number of quality deer I saw this season, the increase in the number of coyotes and Maine's rapidly changing woodland landscape.

To justify my concerns, I am not about to quote IFW statistics; deer harvest numbers or verbiage from the mouth of the state biologists. Why? Well, because quite honestly I don't care. IFW can continue to debate the game management issues and wallow in their own bureaucracy until they turn red in the face. By the time they finally are empowered to make a decision the whitetails will be beyond the point of saving. What concerns me most is what I saw with my own eyes, during the three months a field this season and what I have experienced in my 30 years of hunting.

In my small, surprisingly unposted, hunting area in the central part of the state I am surrounded by tree harvesting operations and new clear cuts. Due to proximity, most significant to my hunting season was an extensive new "selective" cut near my residence that penetrated deep into prime, dense, thick areas of spruce bordering a hardwood ridge rich in mature oak and beech. Good-bye deer wintering yard and so long food supply.

Additionally, coyote sign seems to be the only thing that is increasing exponentially. Walk any ridgeline from Kittery to Madawaska to Eastport to Bethel and you will note rocks littered with the hair filled scat of the eastern coyote. Sure there are dedicated sportsmen who pursue these beasts in the penetrating cold of the Maine winter but this is a diminutive group. The relatively low numbers of animals that are ultimately taken by these hunters do little to off set their annual winter destruction of the deer population. Reflecting on this, I commend any Maine sportsmen who continue to ensnare coyotes despite current "regulations".

Adding all of my time together throughout the three months of hunting totaled around 200 hours. Add to these preparations, driving to destinations, etc. and I spent well over 200 hours chasing the elusive male whitetail with antlers in excess of 3 inches. In this time, I saw 10 does and was offered 4 shot opportunities on that sex. This obviously equates to around 50 hours invested for every shot opportunity afforded on does. For the bucks only crowd this equation of success decreases dramatically to zero.

I have heard that the definition of insanity is defined as a person who does the same thing over and over with absolutely no hope of changing the situation. Call me "insane" but isn't this exactly what I just spent the past three months doing? As the crazy texting teenagers say WTF!

Where do I go from here? Well, with some soul searching, I am currently doubtful about next season. Of course with an entire year to reflect, it is certain that my outlook will change but currently I am overloaded with deer hunting . . . I have drank my fill and am done.
Posted by Rabid Outdoorsman at 12/15/2009