Lost in the Maine Woods 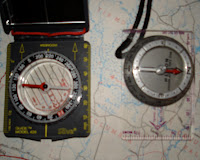 I wanted to share this brief story with other outdoor people to show that even in wilderness areas you know well it is still highly possible to get turned around or even perhaps "lost". Being prepared for these situations and knowing what to do if and when things breakdown and fail is critical to being safe in the woods and on the waters. Take Care and Enjoy!

As I walked forward in the dim predawn light, my LED headlamp barely managed to cut through the thick fog and driving rain. Concentrating all my visual efforts on my feet to keep from tripping and falling, I suddenly looked up and came to the realization that I had managed to overshoot my tree stand. I was now standing in completely unfamiliar surroundings and had lost all sense of direction. It appeared that in my overzealous attempt to get to my tree stand before first light, I had accidentally stumbled into an extensive maze of skidder trails, slash and cut trees that offered little hope of escape.

As I arrogantly reached to my neck for my compass, I realized that I had forgotten it on the workbench. With a slight knot in my stomach, I then timidly searched my backpack for my GPS, sadly it still resided in my "Duck Camp" packing box. Now hopelessly lost and without any means of navigational extraction, I spent a few moments pondering the newspaper headlines . . . "Idiot Lost in the Maine Woods Dies 100 Yards from a McDonalds".

Rather than make a bad situation worse, I began to walk through the "lost dumbass" scenario.
- Sit down where you are with your face pointed in the direction from which you just walked
- Eat a candy bar, smoke a cigarette, etc. just get your mind on something else for a minute so you can relax and think clearly
- Stretch out your senses and watch for the rising and setting sun, listen for sounds of vehicles on nearby roads, feel for the prevalent wind direction, smell for wood smoke, oil or gasoline and other factors that signal signs of civilization
- Think of your situation and make a plan of attack

In my case, I waited for the sun to rise and listened intently for the traffic to build on a nearby major commuter travel route. Once daylight improved the visibility and the noises of civilization provided me with a certified direction, I easily found my tree stand in about 5 minutes. The entire time, I had been less than 100 yards from where I had left the climbing stand only 4 days before. What was most interesting (and perhaps a bit unnerving) is that once I determined my location, I realized I was traveling 180 degrees in the wrong direction! Yet another lessoned learned and in this case thankfully not learned the hard way.
Posted by Rabid Outdoorsman at 12/07/2009