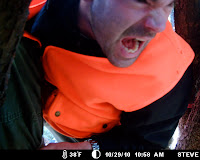 With some additional thoughts and suggestions from fellow blogger comments, I decided to move my game camera from a position in front of a cubby set to a position inside the cubby set. The plan was to be able to capture a photo of the animal actually eating / attacking / mauling the bait. My hope was that it would make for a pretty interesting picture IF I could get it to work. After a little manipulation of the cubby set, I was able to get the camera into its new position and after some initial testing (note my photographic example), I felt it was ready to roll. 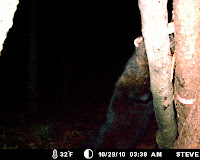 In the end, it didn't work out quite the way I had envisioned and I need to slightly modify the cameras position to get a better angle. I did however capture this photo which I "believe" is a fisher? Please weigh in with your comments to say that you agree or that I need my eyes checked!

FYI, Camera is currently off the bait site and working to pattern deer on a trail near my treestand . . . with only two weeks of black powder deer hunting remaining I have pulled out all of the stops! To those of you still actively chasing whitetails this week and next good luck!
Posted by Rabid Outdoorsman at 12/02/2009