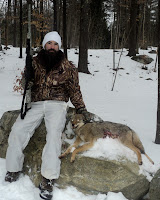 I love it when a plan comes together! This 35 pound male coyote was taken Saturday at 9:00 AM. I was hunting an area I had scouted extensively a month previous containing a large amount of coyote sign. A large granite rockfall of boulders boasted numerous well used dens and I was very confident that the morning was going to be productive. The edge of a small pond allowed me to quietly sneak into position and place my electronic call 100 yards to the NW. A gentle 3-5 mile per hour breeze blew directly in my face as I positioned myself behind a small spruce tree. I played a total of 6 repetitions of screaming snowshoe hare with a minute pause between each and an increasing volume level after every 2 sequences, ending at the max volume for the device. Suddenly I caught movement out of my left eye as two coyotes moved quickly through the underbrush and popped onto the frozen surface of the lake 15 yards from where I was sitting and downwind of the electronic call at about 85 yards. 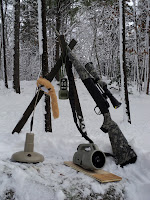 Knowing that they were unable to catch my scent, I took my time raising the rifle and centered the cross hairs on the larger of the two dogs. I whispered "got ya" and pulled the trigger dropping the dog with a lethal round of 125 grain .30-06 Springfield from my Marlin XL7. As if shocked that it had been deceived, the other coyote stopped dead in its tracks and looked around wildly, trying to determine the shot location. Working the bolt action with heavily gloved hands containing bulky heater packs, I made the mistake of not pulling the bolt back with enough force to eject the spent cartridge. As I turned the rifle over, to drop the spent round from the receiver, a VERY luck coyote sped through the forest like it was on fire. I let out a silent chuckle at my mistake but knew that ultimately that coyote and I would meet again! Thus ends yet another wild predator hunting tale made possible because of my new best friend, the Fox Pro Spitfire.

Below are a few coyote hunting resources that I have found helpful. Even if you pursue these critters all the time the exciting thing about calling and hunting predators is that there always seems to be something new and exciting to learn. If you have any questions be sure to drop a comment and I will try my best to answer!