WE are Going to DIE! 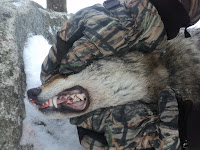 On this particular outing, the DDH and I were to attempt the most complicated of outdoor endeavors the dreaded late night/early morning coyote hunt combined with almost a complete day of ice fishing. While this would be a colossal task, for even the most die hard outdoorsmen, minus17 degree F temperatures kept us constantly watchful for frostbite and the onset of hypothermia, hampering our monumental efforts. At the conclusion of the two days we were rewarded by a ice fishing flag, a short salmon and some blood curdling late night coyote hunting. 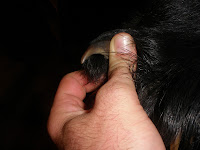 The full moon cast eerie shadows throughout the woodlands making my eyes swear they could see movement even when there was none. After 15 minutes of sitting on a granite shelf on the edge of a frozen swamp, the sounds of wounded snowshoe rabbit, blasting on the electronic call, had a chorus of several excited song dogs wailing LOUDLY west of our position. A concerned DDH, slowly turned his head in my direction and whispered "WE are going to DIE!" This was soon followed by a remark inquiring on how many rounds of ammunition I had decided to bring and how fast I thought I could work a bolt action rifle. As a true “friend”, to further frazzle his already frayed nerves, I cranked the electronic call to its highest volume and hit "lone coyote howl". The DDH flinched in his seat (possibly from releasing something in an uncontrolled fashion) and his eyes expanded to the size of dinner plates. I had all I could do not to burst out laughing but immediately choked back this vocalization, as I frantically had to repeat, "that was me" lest he attempt to run for it. 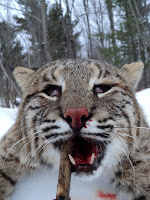 In DDHs defense, if you have never hunted predators like coyotes, bobcats and bears you are unaware of how vulnerable it can make you feel. When a coyote howls or a bobcat or black bear silently stalks past you by only a few feet, the hairs on the back of your neck will stand on end like you are conducting electricity. Goose bumps spring forth from your body and your primitive mind regresses to a time when man was the hunted and not the hunter of these beasts. I sometimes feel it is similar to watching a horror movie, there is something unique inside each of us that simply enjoys a good scare. When you combine this adrenaline packed punch with the challenge of calling and the added struggle against the winter season, you begin to see the attraction of hunting these predators.
Posted by Rabid Outdoorsman at 1/25/2011