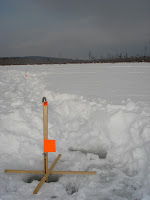 My ice fishing trip to Meddybemps was quickly ended when upon leaving Alligator Lake, I received a phone call from Mom indicating that husband Leonard (AKA Lenny the purple faced champagne chugger) had taken a bad fall on the ice in the driveway and had severely dislocated his shoulder. Plans to fish would have to be canceled. Arriving at Ma’s on Day 3, I was relieved to have a day to reorganize/repack gear and avoid the day’s high winds and teen temperatures.

Day 4 had me traveling back across Route 9 - The Airline to join Dad on Upper Lead Mt. Pond (GAZ Map 24 A-5) to enjoy another cold and windy day trying out our luck at catching Brown Trout. At around 8:00 AM I received a call to verify that my brother (just off a night shift) would soon join us. Don’t you love it when a plan comes together!

Temperature and wind on the barren pond surface had me drilling and setting all of my traps while wearing my full face ATV helmet. The extra weight tugged at my neck muscles but was still amendable compared to braving the icy blasts. Despite the struggle, by 10:00 AM 15 tip-ups littered the surface of Upper Lead Mt. Pond and Bro, Dad and I were sitting comfortably in a heated ice shack frying onions and red hotdogs, playing cribbage and waiting patiently for a flag to POP!

A full day of ice fishing and we ended with one flag to show for our monumental efforts and not a single fish landed. At 3:00 PM I started picking up traps, so I could get bait (rainbow smelts) in Princeton and have plenty of time to meet Tony AKA Duckman at my Grandfathers before heading to Grand Lake Stream. The plan was for Bro and Dad to hook up with us the following evening to hit the hard waters of West Grand Lake on Thursday. A call from my brother at around 5:30 PM indicated Dad had badly pinched a nerve in his back and was headed to the emergency room. After getting Dad to hospital Bro would not be spending the night alone at his camp on Upper Lead and would rather instead be joining us at Gramps before heading on to West Grand with us that evening. Taking a quick count, I noted that the injuries and the drama were mounting and I began to wonder how the remainder of the week would progress . . .

Next: The Salmon of West Grand Lake