From Trophy Winning Pike to the Dinner Table 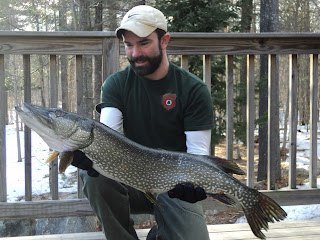 “If it looks good eat it”, is the popular catch phrase of Andrew Zimmern of the Travel Channels Bizarre Foods. As I watch him weekly scoff down a plethora of unusual food choices, I often ponder how he would feel about eating a Northern Pike. Most likely, he would marvel at its delicious, flaky white meat and jubilantly describe its complex textures and lack of fishy taste when battered and deep-fried to golden perfection. Then of course, he would suck out the fish’s eyeballs and chew them up with gusto and I would hurl and that would be the end of the show. I imagine it would be quite an interesting episode. 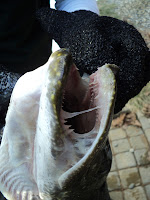 Back to reality and the job of processing my personal best and tourney placing Northern Pike for the dinner table. This ordeal started with the extraction of a very large (17.70 lb) frozen pike from my chest freezer and it taking a 5-hour soak in my bathtub (yes, my wife is a very understanding woman). I debated using the hot tub but was concerned the excessive amounts of slim dripping off the beast might clog the intake jets (did I mention my wife was understanding?).

After a through defrost and de-sliming, I hauled the fish and a large number of cutting utensils out onto the deck and started in on the chore of filleting. Using a heavy hunting knife, I made several initial cuts to slice through the thick skin and allow the more delicate fillet knife to do its job unfettered. The processing took about 15 minutes and there were a lot more bones then I remember from completing this task on a similar sized fish a few years ago. In the end, the fish yielded 8 full cups of pure white meat sure to be enjoyed in the weeks to come.