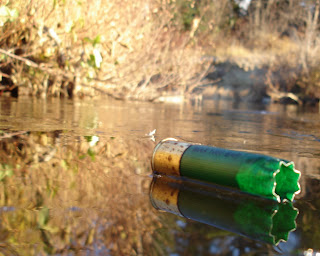 Awoke at 5:30 and looked out my hotel room window to a world covered in a dusting of fresh snow. As I layered on the cold weather gear and brewed a quick cup of coffee I could feel my pulse quickening. I was shot a strange glance by the hotels night manager, as I strolled by with my 12 gauge and duck and goose calls hanging from my neck and I wondered just what he might be thinking.

I started the truck and fired up the heater to clear the thick layer of frost off the windshield. When I looked at my thermometer it was reading 27 degrees F. I quickly wolfed down a Nutrigrain bar, a couple Fig Newtons and a few swigs of partially frozen Gatorade and was on my way. 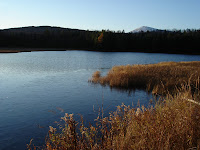 It didn’t take long to get to the marsh pond especially after my previous evening of scouting (grouse hunting) and I knew exactly where I needed to go. I unloaded the kayak and all of the necessary “gear” and noted that a thin layer of ice had wrapped itself partially around the small pond. In the process of gaining access to the area I had to use the paddle to chip through the thin ice. Just as I cleared the ice I head what sounded like a distance jet plan. Wrong, it was in actuality about 200 ducks of all various shapes and sizes making an expedited exit from the pond! This invigorated me (despite the 27 degrees and biting wind) and I was immediately encouraged that this was in “the” spot. 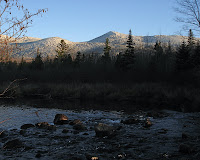 I quickly set-up six decoys 2 golden eyes, 2 buffle heads and 2 mallards all roughly spaced about 20-25 feet apart. Many will no doubt wonder why I threw out such a unique spread so let me briefly explain. Ok, here it is . . . this seasoned water fowler slightly panicked! Seeing all those whistling wings and legal shooting only moments away I simply grabbed the first decoys that came out of the bag and chucked’em.

I had barely managed to back the kayak into a marsh divot and throw the camo covering over the boat when suddenly in paddles a stinky old shoal drake (AKA Red Breasted Merganser). Well, I would like to say that I “flushed” the bird and took a brilliant left to right shot but in truth I blasted away as he entered 15 yards and when he then then attempted to fly I followed with an additional round of Hevishot #4s. Hey my shooting may not be pretty but its effective.

Sitting in the kayak I waited as the icy wind drove the small bird close. I waited patiently AND waited . . . AND waited for the flocks to return or additional ducks to fly but none ever did. I soon ran out of time gathered up the decoys and headed back to the landing. I had just enough time to breast out the shoal drake, slap it in the cooler and hit a quick shower before I needed to get to work.

I am now sitting in the shadow of Sugarloaf at a conference and day dreaming about my exciting morning afield.
Posted by Rabid Outdoorsman at 10/24/2008