Ducking with the Old Man 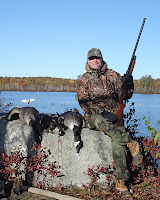 Took my Dad out this past weekend for a bit of duck hunting and I think I blew the poor guys mind. Though he is certainly not new to blasting ducks his experiences with waterfowl hunting had ended almost 30 plus years ago. In his youth most of his waterfowling consisted of spending hours sneaking up on his belly to secret marshes and then jumping up and blastin' them. When I inquired how the downed ducks were retrieved he said they would simple swim out and get them. Apparently duck hunters were tougher back then!

Dad laughed at the number of decoys I put out and almost fell over backwards when I pulled the spinning wing Mojo out from under the boat seat. He gave me one of those "looks" and then inquired if that THING actually would attract ducks. I insured him that it would and he shot me a skeptical glance. 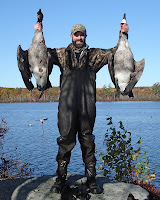 We had a beautiful morning and the ducks were flying relatively well. We had a buffle head "we" duck early in the morning that was riddled with shot from both my Franchi 612 semi auto and Dad's Ithaca model 37 pump. Later in the morning I was successful in bringing in two different groups of Geese and we dropped two out of those flocks. I have to take credit for finishing both geese since Dad was a little bit limited in his 2 3/4 inch payload of #4 steel and only flared the geese. I however was firing 3 inch #2 heavy shot and dropped both of the flared geese like they were hit with sledgehammers. One goose landed on the island we were shooting from and it was my dog Onyx's second retrieved goose! The other glided down the lake several hundred yards but in the end was retrieved via outboard power.

Later about 8:30 the old man redeemed himself as he brought two golden eyes out of the air with ONE SHOT! Well as you can imagine the old man called me last night and wants to go out hunting again this weekend . . . I am going to assume that he had a GREAT time!
Posted by Rabid Outdoorsman at 10/23/2008