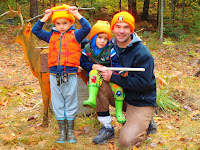 It matters little what your stance is on kids and guns, eventually every child in the known universe is subjected to enough television violence or children playing cops and robbers on the playground, where eventually they are going to pick-up a stick, point it at another human being and go BOOM, BOOM your dead.


From soldiers, to cops, to even game wardens, people shooting people and violence will always be who we are as a society. Now don't get me wrong, all I did as a kid was play GI Joe, cops and robbers, cowboys and Indians and shoot every red squirrel I could find and I have not grown into a psychopathic serial killer.

Even with this perhaps lax view of kids playing the boom, boom your dead game, I decided that perhaps the kiddos would enjoy a chance to refocus these hostilities away from their games of shooting each other and play a new game I devised called "Deer Hunter".

This new game was an instant success and in the process, the lil guys learned a ton of critical outdoor skills. Equipped with our compasses, deer calls and “gun” sticks, we learn how to track deer, walk quietly in the woods, use a compass, grunt up a buck and even the cardinal rule to always keep your stick pointed at the ground and away from people. When these types of skills are practiced and learned by kids at a very young age, they of course become ingrained and simply part of how things are done with in the woods.

The brave junior hunters and I would like to extend best wishes to all of you during the 2011 deer hunting season. Make sure this hunting season to introduce a new or junior hunter to our sport and help to ensure that our hunting traditions continue to thrive. Good luck to all!
Posted by Rabid Outdoorsman at 10/29/2011