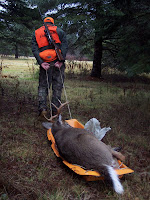 This isn’t to say hunters can’t tip the odds in their favor by knowing their chosen firearm and only taking decent shot opportunities. Unfortunately, fate dictates that sooner or later, some unforeseen event will occur, causing a shot to be untrue, resulting in a wounded deer. When this regrettable event occurs, being unprepared exacerbates the problem, often leading to an animal suffering an agonizing death.

This mindset isn’t meant to discourage but rather educate hunters to the possibility that things may not always go as planned. When the unfortunate occurs, veteran sportsmen know that preparing for the worst and hoping for the best is an effective means of increasing their chances of locating a wounded animal.

Know Your Physical Limits
Tracking a wounded animal, field dressing and dragging is an extremely labor intensive activity. More fatal sportsman heart attacks occur during this critical period than any other. Protect yourself by being honest with your physical abilities. Never be too proud to admit your limitations and accept assistance. If your physical shape is lacking, consider starting an exercise routine in the preseason. Incorporating a small amount of moderate exercise into your normal day-to-day routine will make your time outside chasing whitetails safer and more enjoyable.

Exit Plan
During preseason scouting missions and by studying area maps develop a basic understanding of your hunting location(s) closest extraction points. Should you shoot a deer and tracking it become necessary, possessing an intimate knowledge of the roads, ATV trails and waterways will assist you in designing an exit plan, regardless of where your deer is ultimately found. This forethought will assist you in getting your deer out of the woods faster and with less effort.

Weather Forecast
Before heading into the woods be sure to check your local weather forecast. Knowledge of the predicted weather will assist you in designing a game plan should you need to track a wounded animal. If precipitation is falling or predicted to occur in the immediate future, it may be best to locate a wounded animal as soon as possible rather than waiting. Rain and heavy snowfall can quickly make a blood trail evaporate. When faced with difficult tracking situations, it is helpful to think out of the box and employ alternate strategies for locating wounded animals.

One drab November evening heavy rain hindered my ability to locate a shot deer. While I was confident that the hit was relatively good, I was having great difficulty following the diminutive blood trail in the pouring rain. As the sun dipped below the horizon, I lost the trail completely. Returning early the next morning, I crept quietly into the woods and sat on a stump at the last point blood was found. Half an hour later, I could see crows circling about 200 yards away. Walking over to the area, I immediately located the downed doe. The crafty and wise eye of the crow directed me to the lost animal.

Critical Steps After the Shot
Keeping a cool head after pulling the trigger is easier said than done. The excitement and pumping adrenaline can make even the most seasoned deer hunter lose concentration. Despite these distractions, you need to be able to answer two critical questions after pulling the trigger. How did the deer react when the shot was fired and by looking and listening where did it go? Your ability to answer these two basic questions accurately, will determine your success in finding your deer.

The waiting game is difficult when anxiety is high but unless the deer is clearly dead wait a minimum of thirty minutes before moving. If not hunting from a distinctly obvious stand or blind location, mark the point where you made your initial shot with a piece of flagging tape. This visual clue will allow you to recreate the shooting scenario should you be unable to find a blood trail. Take a compass bearing to insure you know the exact line leading to where the deer was shot and a second reading in the general direction the deer was moving after the shot was fired. Before you begin tracking be aware of your location. Following a wounded deer can be a frustrating and confusing experience that can quickly lead to getting lost.

Even when a deer falls where it is shot, placing the cross hairs on a fallen deer and preparing for the possibility of a follow-up shot does no harm. If the original shot is found to be poor and the deer gets up it can be immediately dispatched. This practice was put to good use one late November, when after several minutes a small buck I had unknowingly hit ineffectively stumbled to its feet and began slowly walking out of the shooting lane. An immediate second round halted his retreat. Had I not been prepared for the second shot, I may have spent hours tracking or even worse lost him.

Indicators
Blood, hair and even bone fragments at the impact site all contain clues that will assist you in determining the quality of the placed shot. Note where blood is found and examine the color and approximate amount. If little or no blood is found, it has a dark red hue, odor or contains vegetable matter (indicators of a gut shot animal) wait two or three hours before attempting to follow a blood trail. This time will allow the animal to settle down, bleed out and die ultimately providing for recovery in a smaller search area. Crimson red blood that quickly disappears can also be a negative sign indicating the animal may have been shot in a non-vital muscular area.

Regardless of the amount of blood found every effort should be undertaken to find a possibly injured animal. Even no blood could ultimately reveal a critically shot animal. Deer are extremely resilient but eventually even the strongest will succumb to the trauma inflicted by a gunshot of sufficient caliber.

Critically shot deer will continue with basic patterns of behavior, tending to follow contour lines, favoring downhill travel and gravitating toward water. When determining course of travel, blood droplets leave small “fingers” that point in the direction the wounded deer is moving. Conducting wide sweeping arcs can assist a hunter in finding tracks, broken branches, hair and other indicators. If a deer is thought to have fallen in a relatively small area, it is effective to use your compass to run a grid shaped search pattern, marking your search lines with orange flagging tape.

Leave or Extract
Fading light or the need for additional assistance may require you to leave your trophy in the woods overnight. To discourage predation, the most viable option is to hang the carcass four feet off the ground. Getting the deer to this height requires a suitable tree, heavy rope and a good deal of muscle strength. In areas of relatively low predation you may be able to get away with leaving the deer on the ground, covering with your coat liner, debris and urinating nearby. The combination of the sweat and urine should discourage four legged predators and the hasty covering the winged assailants. Before leaving, mark the area with plenty of flagging tape, note on your map and lock in the GPS coordinates.

You may have seen individuals carrying deer out of the woods on their backs in the movies but even a small deer makes this an impossibility and carried in this fashion is a good way to get shot. Best to keep your deer on the ground and let the movie stars do the heavy lifting.

If hunting from a specific location during the preseason, I leave a plastic kid sled, rope and bungee chords in a readily accessible location. When a deer is shot, retrieving these supplies is easily accomplished and the dragging made exponentially easier. Whatever option you choose be sure to tie up the animal so it doesn't fetch or fall off the device at an inopportune moment. A shoulder strap for your firearm or a backpack capable of carrying it leaves your hands free to facilitate this process.

Conclusion
Becoming better hunters should be a goal that we all strive to obtain. While the harvesting of game animals is not always a perfect process a sportsman’s ability to rise above adversity and challenges is what makes an average hunter superior. This season before pulling the trigger make sure that you are properly prepared and you are likely to find that it will make for a much more enjoyable and safer experience after the shot.
Posted by Rabid Outdoorsman at 10/28/2009