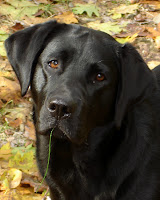 Since its Duck Season I thought this Joke Fitting.
This guy is hunting a swampy puddle with his dog and being watched by an Outah State hunter. The guy says a couple directions to the dog and the dog takes off and a short while later comes back. Once the dog returns it holds up a paw and the guy heads down into the woods, fires off a few rounds and returns with a couple nice ducks.

The Outah Statah walks over and asks what in hell is going on. The guy says that the dog is trained to run into the swamp and report back how many ducks are present by holding up his paw and with the correct number of digits.

The Outah Statah is amazed by this behavior and asks to buy the dog. The guy finally relents to the huge sum of money and lets the dog go. A couple days later the Outah Statah calls the guy and says that the dog isn’t doing what he asked. All the dog will do is run down in the swamp, grab a stick and come back and hump the Outah Statah’s leg. Well, the guy says, what the dog is trying to tell you is that there are more FN ducks down there than you can shake a stick at.
Posted by Rabid Outdoorsman at 10/15/2009