How do you define Delicious? 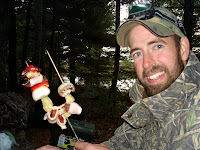 Still suffering from the nuclear fall out from the previous nights battle with the four alarm chili con carnage and 1/2 a box of white wine, the Duckman diplomatically suggested that we try a less "atomically fueled and intoxicating" dinner menu. His instructions were simple. Get me some bacon, skewers and pineapple chunks . . . grinning he added . . . hold the alcohol! With my official orders in hand, I was off to the market! Within a few hours, I had completed the required tasks and preparations and with cooler in hand had driven back to duck hunting headquarters.

At the boat landing several more cars were parked than earlier and I could tell that Duckman had been waiting at the busy ramp for quite awhile. He inquired about my rather unimpressive judgement of time. Not one to blantantly lie to the honorable President I explained, with my tail between my legs, that I had been "napping" and had misjudged the agreed upon time. Not in his nature to administer an outright tougue lashing for such a breech in duck hunting ettiquette, Mr. President instead provide me with a lecture on all of the exponentially useful things he had done while I was exploring dream land. Dry wood had been piled, ducks had been cleaned, decoy lines and weights had been inspected, the campsite had been re-organized and more hunting had even been done. When I inquired if he had napped even a little, I was informed that he would get plenty of sleep when he was dead. 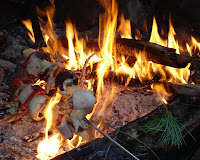 After an afternoon hunt filled with missed opportunity, our stomachs finally won out against our desires to shoot more ducks. Returning to the campsite we started the fire and then began the process of wrapping teal, wood duck, mallard, ring neck breasts and deer steaks in bacon and skewering them along side pineapple chunks, red pepper and mushrooms. Leave it to the honorable President of Duck Power Incorporated to come up with a culinary masterpiece that would rival the likes of Bobby Flay. To say the meal was fit for a king would do this culinary experience a diservice . . . if delicious could be rated as a 10 this meal was an 11! Some things just taste better when enjoyed in the great outdoors and in the company of good friends!!
Posted by Rabid Outdoorsman at 10/19/2009