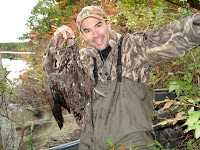 If we all have a role to play, then I am surely the anointed comedian or humorist of Duck Power Incorporated. Perhaps it is no coincidence that 100 years ago this role would have been more aptly named court jester or simply "fool". Because of this unnatural dysfunction, I am always devising inventive and interesting ways to harass and pester my duck hunting brethren. Of particular note, is the great wader debacle of the 2009 waterfowl opener.

Mr. President had arrived at my house carrying a sizeable rectangular package, reeking of silicone and with the words "Cabela's" stenciled across the front. With a titanic size smile, he proudly announced to me, as well as most of my neighborhood, "My new waders!!"

In the interest of time, I was instructed to open the package and have the waders ready for him to wear before he returned from "dropping the kids off at the pool". Not wanting to miss such a valuable opportunity to "assist" the President, I immediately went to work replacing his new space age neoprene 1600 waders with my old, beat-up and muddy 10 year old antiques.

With eager anticipation, I awaited Mr. Presidents return. As he opened the box, I could see his smile slightly waiver. Despite his very best efforts he appeared, a very out of character, rattled. I boldly blazed forward with comments about shipping miscalculations and the accidental delivery of sub par second hand merchandise. I even unabashedly stated, that at the very least they could have washed the mud off before shipping. 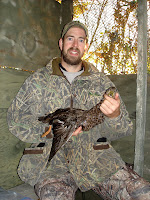 With a concerned half smile, Mr. President brushed off my barrage of derogatory remarks and attempted to defend his "new" waders. I believe he even stated that the mud covering them was some new high tech camouflaging method. Finally, I could hold it together no longer and laughing like a lunatic proceeded to haul the Presidents waders out of their hiding place. Mr. President breathed a slight sigh of relief but not a single chuckle escaped his pursed lips. Instead I received that most disapproving of looks and a simple . . . "Not cool!"

Please stop by "The Downeast Duck Hunter's Blog" for what can only be described as an alternate perspective on an already shaky set of truths!
Posted by Rabid Outdoorsman at 10/16/2009